Yesterday, I picked a few eggplants and the first zucchini from the garden. I told the kids we were having eggplants for lunch, and The Boy said I’ll eat it if you fry it. So, I did, and made this.

Except he could tell it wasn’t deep fried, so he picked at it and left a big portion on his plate. His sister, The Girl, on the other hand, helped herself to more. See, it’s a house divided.

Today I relented and made fried vegetables and shrimps. And along with his favorite fried shrimps, TB ate the eggplants! But now it was TG who pushed aside the shrimps. Divided!

The fried vegetables reminded me somehow of what happened in Rome, at Arturo’s. An excellent restaurant, by the way. If you happen to be in Rome and staying at the Crown Plaza, I would suggest that you walk over to Arturo’s for your dinners. Instead of having them at the hotel. Trust me, the food at Arturo’s is much better.

When we were in Rome, after the initial meal at the hotel and then venturing into Arturo’s the next day, we never again ate at the hotel, preferring instead to haunt Arturo’s, which was also popular with the locals, a true measure of a good restaurant. It was swelling with families dining in big groups the first night we were there. So, imagine our shock when we came again the next day to find it completely deserted at 7:30 pm. Apparently Italians don’t have dinner until much later. The place once again began to get packed as soon as 9 pm hit.

But because we were the only customers at the time, it allowed our waiter to give us extra attention. TB had ordered some kind of grilled meat and that was what he got, grilled meat. Pretty much the norm in Italy, side dishes had to be ordered separately. There might have been a piece of roasted pepper or tomato on the plate, but he wasn’t going to eat that.

Noting the pushed aside vegetable, our waiter started joking with TB. You don’t like vegetables? No. Try Italian vegetables, you’ll like them. I’m not sure. Are you still hungry? Yeah, a little. Okay, give this a try, I’ll order it for you, you’ll like it.

It was a platter of mixed fried vegetables, the fritti misti. There were carrot, broccoli, zucchini and even pepper pieces. And guess what? He ate them all, including the peppers. Our waiter slapped him on the back when he saw the empty platter later, and exclaimed, See, you like Italian vegetables!

Then he noticed the huge amount of food still left on TG’s plate. You’re not hungry, Bella? She shook her head. He came back with a selection of dolce. And made her really happy. Plus he called her Bella.

Sabo tipped him generously that night, for making our meal so memorable, but mostly for converting TB into a vegetables eater, albeit deep-fried vegetables.

1. In a medium bowl, mix the egg white, vinegar and olive oil. Beat with a whisk or a fork.
2. Mix in the flour, corn starch, baking soda, and salt & pepper. Then add the water, a little at a time and continue mixing, to form a thin batter. Let it stand for 15 minutes, while you prep the vegetables.
3. Dredge the vegetables in flour, shaking off excess.
4. Heat the oil until it reaches 375° F, or until a piece of bread sizzles as soon as it is dropped in. If the oil is not hot enough, your vegetables will end up greasy.
5. Working in batches, dip the vegetables into batter, then carefully and gently drop them into the hot oil, to avoid splattering. Always be careful when working with hot oil. You can use tongs if you like. Fry for 2 minutes, or until golden brown, flipping the vegetables once.
7. Remove and drain on paper towel. Remove bits and pieces of loose fried batter and allow the oil to come back up to correct temperature between batches.
8. Serve with either marinara or sweet chilli sauce, or my favorite dipping sauce for fried food, soy sauce mixed with vinegar. 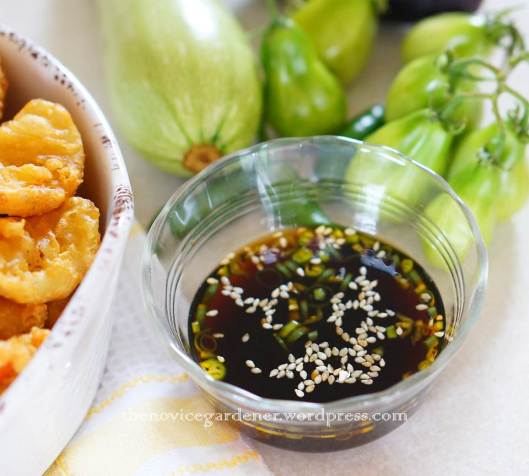 Mix all ingredients together in a bowl.

By the way, the batter recipe above is also good for shrimps, which I fried along side the vegetables.

Not the healthiest recipe I know, due to the deep frying. But do you want your kids to eat eggplants or not? This is the way to do it. You present a hated vegetable unsuspectingly, prepared in a manner that would please their palate, then when they get older, boom … you lay it thick on them, plainly grilled or steamed, and they won’t complain. You can only hope.

But, if you’re against deep-frying, I’ll give you the healthier version, too. The baked version. About 93% as good. Just kidding, my daughter and I really prefer this version, while the boys prefer the fried. Didn’t I tell you it’s a house divided?

Oven Fried Vegetables
Mixed vegetables (The green tomatoes are really good here, by the way)
1 cup seasoned breadcrumbs or you can season your own plain breadcrumbs with 1/2 tsp each salt, pepper, garlic powder, paprika and your preferred dried herbs. Oregano in my case.
1/4 cup shredded Parmesan
1 large egg
Olive oil

1. Preheat oven to 400° F. Drizzle olive oil on your baking sheet.
2. Mix the seasoned breadcrumbs with the parmesan, spread on a large plate.
3. In a bowl, beat the egg.
4. Dip vegetable pieces in the egg, shaking off excess, then roll in the breadcrumb mixture to coat all over. Place on the baking sheet. Drizzle with more olive oil.
5. Bake for 20-25 minutes, turning once halfway through, until golden brown and crunchy on both sides. This one is good with marinara sauce or ranch dressing, not soy sauce.

So, if your house is divided like ours, you might want to make both kinds of vegetables, to make everybody happy. And more importantly, the vegetables you grow conscientiously from seed to fruit will be eaten and appreciated, instead of thrown back into the compost bin.

27 thoughts on “I’ll Eat It If You Fry It (Also Daily Prompt: A House Divided)”

Happy early 4th, guys! How are you all going to celebrate? Is anybody thinking of having a block party? Wouldn’t that be fun, huh?! A couple of years ago, just before the pandemic, we celebrated with several of our immediate neighbors, potluck style. We had such a good time we promised to repeat it annually. […]

So, the elderflower champagne experiment was a bust, unfortunately. And I spent SO. MUCH. TIME! I trimmed off every little stem from the blossoms since the green parts are reportedly toxic. That alone took me a couple of hours! Pretty much my whole afternoon was spent making the elderflower concoction. It was supposed to ferment […]

School is out, finally! Hurray, hurray! So now, what?! The first day I don’t have to go to work and I’m not sure what to do. Too many choices! I’ve never been a decisive decider. Sleep. That’s the first order of business. Everything will become clearer after a good, sound sleep. So I’m just going […]

A friend from work who knows about my blog, and no doubt has been perusing it, recently commented about my recipes. She tried a few and found them to be, in her words, delicious gourmet fancy food. She marvels at the food photos on the blog and contends that I must spend an excessive amount […]

Gosh, it got so hot this week! I can’t stand the heat, guys! So I got out of the kitchen. We’re subsisting on salads and cold sandwiches. Don’t feel sorry for us. We’re eating well, truly. Yesterday’s salad looked like this. Pasta salad for the win! With minimal cooking and prep other than boiling the […]