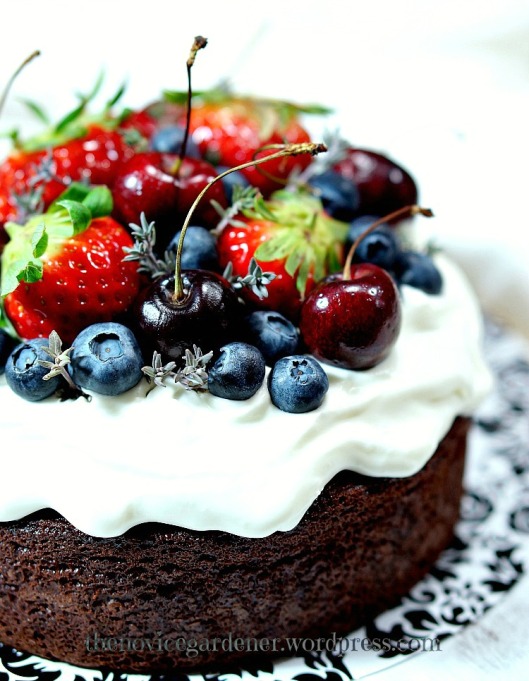 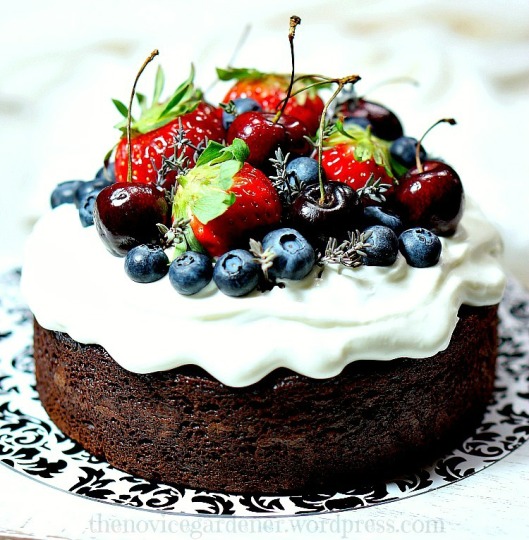 I missed my own party, oy!

I missed my own deadline, that’s what I meant. Still…oy!

I was supposed to bring you a dessert. A special dessert. Only it didn’t go as planned.

First off, I had such a dilemma about what to bring to Fiesta Friday Anniversary Part 2. I knew I wanted to bring a dessert. And to me, pies reign supreme as far as desserts are concerned.

So I thought about combining the two, a pie and a cake. I thought it was going to be so creative. I would bake a pie in the shape of a cake. And then stack another cake-shaped pie on top of it. Then pile a cloud of whipped cream on the whole thing and stick decorations or candles. And then it was going to be called a pie cake.

Trust me, this wasn’t the pie cake I had in mind.

I was set to make that pie cake. But first I had to google to see if someone had done such a thing before. I googled “pie cake”.

Do you know what you get when you google “pie cake”?

Topping the search engine result is this video from Food Network showing you how to make this cake.

What the heck?! Did you see that?

Apparently, there’s a bakery in Texas that makes this crazy concoction of a cake. 3 pies baked into three layers of cakes, stacked and iced. They call it PumPecApple.

Okay, who would have thought of such a thing? Only these 3 brothers from Texas, I guess.

I showed the video to my husband and kids. My daughter made a face, the same one I did when I first saw it (gross, right?). The boys, on the other hand, got extremely excited. Typical.

I wasn’t sure I would like the taste of such a cake. The whole thing just seemed too crazy; I do have my limits. But I knew if I made it, my Fiesta Friday friends would appreciate my effort.

My plan was to make only the layer that appealed to me, the pecan pie in chocolate cake layer, twice, and stack them to make a tall cake.

The night before, I made the pecan pies. So far, so good.

The next day, I made the chocolate cake batter. Still okay up ’til now. The batter tasted great and everything. I poured it into my cake pans.

Then I ran into trouble when I placed the pies in. The pies were too high. Too deep for the cake pan.

At first I placed one pie face up, hoping the batter would rise up and engulf it as it baked.

It didn’t. Instead I got this.

So for the other one, I placed the pie face down, just like what the Food Network video showed. The batter didn’t exactly cover the pie, so I smeared more.

I was dubious this was going to work and my suspicion was confirmed. Basically, I got the reverse of the last cake. This time I got a cake with the bottom of a pie in its center sort of suspended in a little crater.

At this point, I started cursing the 3 brothers like they were my brothers.

So now I was left with these 2 pseudo cake/pie things I had no clue what to do with.

It took me another day to appreciate the failures. We’re humans. We make mistakes. And I hate to waste perfectly good food. I served the one pie cake as is. It actually started to grow on me after a while. I decided it wasn’t ugly and proudly presented it to my family. They didn’t even blink an eye. They took to it like ducks to water. It was GOOD! Like serious GOOD! 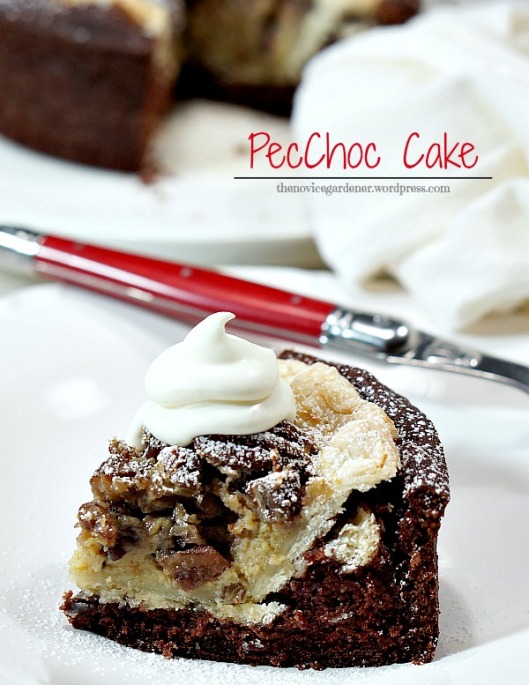 The other one, the one with the crater, I saved. And gave it the white-chocolate-mousse-frosting treatment (which by the way was also another saved failure), and piled fruits in the indentation. It was asking for it! Now, doesn’t it look pretty enough to serve at Fiesta Friday Anniversary?

I think so! But of course, I’m too late. All the guests have gone home…..

87 thoughts on “The Saved PecChoc Cake”

There is no such thing as a small-batch lasagna, is there? When you make lasagna you gotta commit. Including the possibility of it bubbling over. Clever cooks would have used a sheet pan underneath the lasagna to catch the spill, but the author of this blog aka I/Ik/Ich/Je/Yo is rarely clever. Now I’ll have to […]

The best thing about keeping a garden, other than being able to pick organically-grown vegetables or herbs or flowers at a moment’s notice, is the fact that you can grow varieties of plants otherwise rare or hard to find in the market. Take these beautiful vegetables below, for example. They’re not your run-of-the-mill eggplants, or […]

The daughter strikes again! Just before she left for college, she used our kitchen one last time to make us special treats. Well, not exactly THE last time… I’m sure she’ll come home for long weekends, holidays, school breaks, etc. And that’s when I’ll force her to cook and bake for us, lol! She really […]

Now that summer break is over and I’ve gone back to work, home-cooked dinners tend to be simple. And what could be simpler than this Stir-Fried Honey Teriyaki Chicken? And it’s so good, too! The husband was like… more, please… You don’t need the recipe, do you? I’m sure everyone has a recipe for Teriyaki […]

It’s going to be a busy weekend for me. I’m trying to get myself organized and ready to go back to work on Monday. How is summer going to be over already, so quickly?!😭 The husband and I are also moving the daughter to her dorm this weekend. Yep, she’s flying the coop 😭😭 Why […]